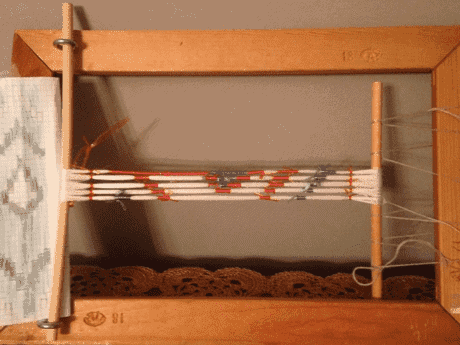 No dyeing experience required.  The yarns we dye will not be woven as they will be taken home wet.  You need the skill to warp and weave with the yarn once you are home.

Khmer textiles are among the most intricate and beautiful silk ikats in the world.  This workshop focuses on learning the techniques used by Cambodian artists to create these 2/1 twills with patterned wefts.  Working with natural fibers (tencel, cotton, silk, or wool) and indigo dyes, yarns will be tied and dyed during the workshop.  You will have the opportunity to study Khmer textile samples and you will learn to graph designs.  You will then make preliminary samples and learn to create individual designs.

Barbara Cabral received her MA from the U of Akron where she taught Contemporary Needle Arts.  Her primary research was madder, in Ohio coverlets which led her to curate several textile exhibits at The Canton Museum of Art, and other Ohio locations. Barbara has lectured on Textile Conservation at The University of Leeds, England, Washington State University, and The Ringling Museum of Art. She has also given textile workshops throughout the U.S., in Tallinn, Estonia, and in Belize. Workshops on her specialty, madder dyes, have been given for weaving guilds and at the Mid-West Weavers National Conference.  In 2016 at FTWG Convention she presented three Silk mini workshops. She has also presented lectures in Florida on Estonian knitting, Working with Lotus Fiber, and Brocade Weaving in Thailand. Her primary interest and work at this time is Khmer Hol.  She continues to travel to Cambodia to study with Khmer weavers and collect textiles.  She is available for lectures and workshops and private classes at her studio in Palmetto, Fl.

Scroll back to top